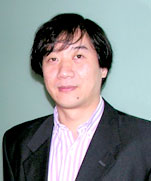 Dr Alex Chengyu Fang got his PhD from University College London and was Deputy Director of the Survey of English Usage at UCL coordinating the syntactic analyis of the International Corpus of English. He joined City University of Hong Kong in 2005 and lectures on corpus linguistics, cognitive linguistics and stylistics.

Alex is an active researcher in the area of corpus-based language studies including grammar, discourse and pragmatics. In particular, he is interested in structural features specific to different genres and registers as well as discourse functions such as dialogue acts. He is the founding director of the Dialogue Systems Group, which is devoted to investigations in language use based on authentic utterances in different contextual settings. His focal emphasis is on applications of linguistic insights in speech and language technology as well as human communication. He designed and constructed a comparable corpus of media English (CCME) and pioneered the automatic application of the ISO standards for dialogue act annotation to the Switchboard corpus of spoken English (ISO-SWBD). He is also interested in broader issues related to language, culture and cognition such as the historical and cultural underpinnings of linguistic expressions and iconographies inscribed on ancient numismatic objects.

Alex serves on several high-profile professional bodies. He is an expert member certified by and representing China on Technical Committee 37 of the Interntioanl Organization for Standardization (ISO). He is an appointed member of the China National Technical Committee on Language Resources for Standardization providing expert opinions and judgements on national standards for language-related services such as translation and interpretation. He is on the editorial board of the Cambridge University Press Elements in Corpus Linguistics (since 2020) and is Adjunct Professor at Beihang University (since 2011). He received the prestigious Sir E.S.G. Robinson Fellowship for outstanding numismatic research from the British Museum in 2012. He currently serves on CityU Senate and coordinates LT's PhD programme.

Alex has published broadly in international journals and conferences such as Corpus Linguistics and Linguistic Theory, LREC, ISA and IEEE-ICSC. His representative book publications include