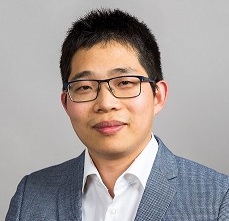 Dr. Zhenpin Lu obtained his B.Sc. in Chemistry from Fuzhou University (2010), where he was involved in a program of national talent training base for the study in chemistry. Afterwards, he received a M.Sc. in organic chemistry under the supervision of Prof. Huadong Wang at Fudan University (2013). He then joined the group of Prof. Hermann A. Wegner at the Justus-Liebig-University (JLU) in Giessen, Germany, where he received his Ph.D. in organic chemistry in 2016. Subsequently, he was awarded a two-year DFG (German Research Foundation) fellowship (also called Walter-Benjamin Fellowship now) in 2017, which allowed him to conduct his postdoctoral research with Prof. Jonathan R. Nitschke at the University of Cambridge in the field of supramolecular chemistry. In June 2019, supported by a DFG return grant, he had a five-month research stay in the group of Prof. Frank Würthner at the University of Würzburg, Germany. In November 2019, he worked as a research assistant professor in the group of Prof. Xie Zuowei at the Chinese University of Hong Kong. In January 2022, he was appointed as an assistant professor at the City University of Hong Kong.