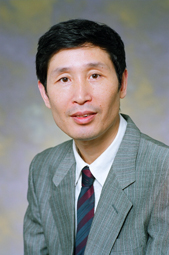 Dr. Xiaoqiao He received his B.S. in Solid Mechanics from Wuhan University of Technology, M.S. in Computational Mechanics from Huazhong University of Science and Technology and PhD in Dynamics from National University of Singapore, respectively. After his graduation from National University of Singapore, he worked as a R&D Engineer in MAINTAINER (S) PTE LTD in Singapore for one year. Prior to joining the City University of Hong Kong as a lecturer in September 2005, Dr He had four years of working experience as a Research Fellow in the joint Research Center of Institute of High Performance Computing and Nanyang Technological University in Singapore. Also, he worked as a Research Fellow in City University of Hong Kong for two years. His main research areas include nanomechanics of carbon nanotubes, smart structures, computational mechanics, parallel computing on PC environment and multiscale modeling of CNT-reinforced composite. Over the past fifteen years, Dr He's research in these fields has resulted in over 120 SCI journal papers in various top international journals and received a total of more than 3500 citations (excluding self-cited ones) with h-index 32 from Web of Science Core Collection. Dr He has co-authored four papers with more than 200 citations each according to Web of Science Core Collection. The paper "Buckling analysis of multi-walled carbon nanotubes: a continuum model accounting for van der Waals interaction by He, X.Q., Kitipornchai, S., Liew, K.M., Journal of the Mechanics and Physics of Solids 53, 303-326, 2005" was evaluated as the top 1% highly influential paper by Essential Science Indicators (THOMSON ISI). This paper ranked No. 3 in Top 10 Cited articles published in Journal of the Mechanics and Physics of Solids in 2009 and 2010. The developed explicit formulas in this paper have been applied by many researchers from USA, Japan, UK, India, Iran and China in their researches. Since Dr He joined CityU in 2005, he has been a principal investigator for seventeen research grants (including seven GRF grants and two NSFC grant) with a total funding over HK$6 millions. The success rate of applying GRF is 7/9.