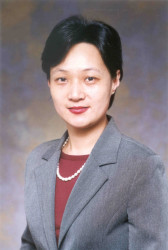 Prof. Lu joined City University of Hong Kong in 1996 as a Research Fellow, was promoted to Assistant Professor in October 1998, Associate Professor in February 2004, and obtained tenure position in 2005. She obtained BSc and MSc from Xi'an Jiaotong University in 1982 and 1985, and PhD from De Montfort University in 1995 respectively. She was appointed as Assistant Lecturer and Lecturer in Xi'an Jiaotong University from 1985-1990. From 1990 to 1993, she worked as a Research Scientist in National Engineering Laboratory, UK. In 1993, she worked as a Research Officer in De Montfort University, UK, obtained Ph.D. degree in October 1995, and took the Lecturer post in Hong Kong Polytechnic University before joined City University of Hong Kong. Prof. Lu is actively involved in teaching, research, and administration duties. She currently teaches Building Services Engineering discipline. Her main research interests include: indoor air quality, air pollution and assessment, built environmental assessment, applications of Computational Fluid Dynamics (CFD) and soft computing in building and environmental engineering. Since 1999, she has successfully attracted 5 RGC-GRF research grants and 16 CityU research grants (in PI capacity). She has authored/co-authored over 180 referred journal papers and referred conference papers. She is actively involved in professional activities as well. She was Past-President of Hong Kong Society of Theoretical and Applied Mechanics (HKSTAM) for 2010-2012. She currently serves as Associate Editor of HKIE Transactions, member of editorial board, Journal of Hydrodynamics, PRC, Guest Professor of Sichuan University and Shenyang Architectural & Civil Engineering University. She is listed in 'Who is Who in Computational Science and Engineering' (http://www.wwcse.com/cgi-bin/whosin.cgi?n=l) since 2003 and 'Marquis Who is Who in Science and Engineering' since 2005. She also serves as member of advisory committee of several international conferences and reviewer for several prestigious international journals.