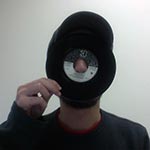 Takuro Mizuta Lippit (aka dj sniff) is a musician and curator in the field of experimental electronic arts and improvised music.

His musical work builds upon a distinct practice that combines DJing, instrument design, and free improvisation. He is interested in how new narratives and new sonic realities can emerge through the “play-back” of a mediated past. This pursuit has led him to build unique instruments and perform in various contexts.

He has released 12 DJ mixes and 4 albums, which includes collaborations with Evan Parker, Otomo Yoshihide, Martin Tetreault, and Paul Hubweber. His work has been reviewed in the New York Times, All About Jazz, The WIRE, MusicWorks, and createdigitalmusic.com.

His curatorial work aims to present a global overview on new experimental approaches to music, sound, and performance. During his appointment as Artistic Director of STEIM (2007 - 2012) in Amsterdam, he has curated and produced over 100 projects including large-scale international festivals and award winning art works. Since 2014, he is Co-Director of Ensembles Asia / Asian Music Network which is an initiative to research and connect independent music communities throughout Asia and showcase collaborative projects at the annual Asian Meeting Festival in Japan.