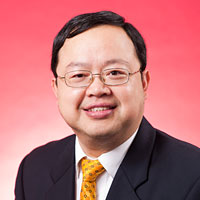 Raymond was the Programme Leader of the HDB/HDBC/AScCEM programme of the Division of Building Science and Technology for over 15 years. He was an Appointed Member of School Management Committee of Jockey Club Government Secondary School appointed by the Education Department of Hong Kong from 1999-2001 and 2001-2003, and was re-appointed again by the Education and Manpower Bureau of Hong Kong an Appointed Member of School Management Committee of the same school from 2003-2005. Since 2004, Raymond was also appointed an Honorary Fellow at the School of Engineering, Griffith University, Gold Coast Campus, Australia.

Raymond was the Chairman of CIOB (HK) from 2000 to 2002. The CIOB (HK) is the Hong Kong branch of the Chartered Institute of Building, a UK-based leading professional institute for managers in the building and construction industries worldwide. Its members at the local branch include top and senior company executives, site and project managers, consultants, researchers and academics. Raymond had also been a Professional Judge of the 7th Building Manager of the Year Awards in 2002: the premier showcase for management excellence, demonstrating best practice that the construction industry strives to achieve on all projects at all times.