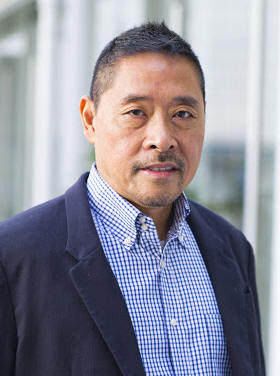 Dr. Leung was born in Hong Kong, and completed his first degree at the City University, London in 1976, graduating with first class honours. He then obtained his doctorate degree in 1981 at the same university. His Ph.D. thesis was in electromagnetic analysis in linear motors in High Speed Ground Transport applications, under the supervision of the research team led by Professor Arthur J Ellison. Professor Ellison was renowned in his research in electromagnetic field analysis in electrical motors as well as in psychic and paranormal phenomena; Dr. Leung has been greatly influenced by Professor Ellison's interest in these 2 areas.

Dr. Leung joined CHAM Ltd. a computer consultancy firm headed by Professor Spalding of ImperialCollege, University of London, as project Engineer in 1981. He was responsible for the programme development of a general-purpose 3D-field solution computer programme. In 1982, he joined the Engineering Division of ERA Technology Ltd., as Senior Engineer and was responsible for various research projects funded by industry.

He joined The Engineering Science Division of Hirst Research Centre, GEC Research Co. Ltd. as Principal Engineer, in March 1984, and was responsible for leading a project on the development of electromagnetic launchers for armour-piercing applications. In 1985 he joined the Weapon Department of Thorn EMI Electronics Ltd., and was responsible for the development of the Radar tracking of the multi-launch rocker system. In 1988, Dr. Leung moved to the USA joining Martin Marietta Aerospace in Orlando, working on the same system.

In 1988 Dr. Leung joined the City University of Hong Kong as Senior Lecturer, and at present he is an Associate Professor in the Electronic Engineering Department, and team members of the Applied Electromagnetics Laboratory. His research interests has been in Electromagnetic Compatibility (EMC), including  Human safety on RF exposure, EMC in Fixed Installations and Large Systems, EMC Management, and EMC in Railway Systems.

Dr. Leung is actively involved in numerous consultancy projects assisting industry, in both Hong Kong and overseas,  in solving EMC/EMI problems. he was  the Director of Electromagnetic Compatibility (EMC) Consulting Group of CityU Professional Services Ltd, City University of Hong Kong; he is also a Non-executive Director of EMC Consortium Limited, Hong Kong.

He is Programme Leader of the Master of Science in Electronic and Information Engineering Programme (MScEIE) of City University of Hong Kong fomr 2001 to 2016.

Dr. Leung is also the Authorized Representative and Technical manager to the calibration of Antennas for radiated Measurement of antenna factors  in accordance with ANSI C63.5-2006, and the EMC Test facilities of the City University of Hong Kong.

He is also Assessor of the Hong Kong Laboratory Accreditation Scheme (HoKLAS) on EMC area, and a member of the working party on Electrical and Electronic Products, Accreditation Advisory Board, Innovation and Technology Commission (ITC), Government of Hong Kong SAR.