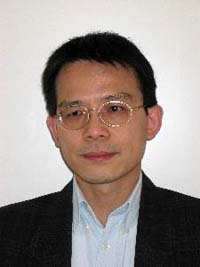 Rynson Lau received his BSc degree from the University of Kent and a Ph.D. degree from the University of Cambridge. He has been on the faculty of Durham University, City University of Hong Kong, and Hong Kong Polytechnic University. He serves on the editorial board of the Journal of Visualization and Computer Animation and IEEE Trans. on Learning Technology. He has served as the guest editor of a number of journal special issues, including ACM Trans. on Internet Technology, IEEE Trans. on Multimedia, and IEEE Trans. on Visualization and Computer Graphics. In addition, he has also served in the committee of a number of conferences, including Program Co-chair of ACM VRST 2004 (Hong Kong), ICAT 2006 (Hangzhou, China), ICEC 2007 (Shanghai, China), ACM MTDL 2009 (Beijing, China), IEEE U-Media 2010 (Jinhua, China), and Conference Co-chair of CASA 2005 (Hong Kong), ACM VRST 2005 (Monterey, California), ICWL 2007 (Edinburgh, U.K.), ACM MDI 2009 (Beijing, China) and ACM VRST 2014.