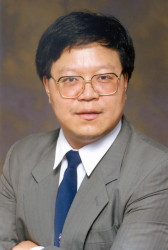 Prof. Qiusheng Li graduated from Shanghai Jiao-Tong University with BEng in 1984 and from Harbin Institute of Technology with MEng in 1987. He obtained his PhD and the best PhD thesis award (Professor K.H. Hunt medal) from Faculty of Engineering at Monash University, Australia. Before joining City University in 1996, Prof. Li had seven years of working experience as an engineer at the Kajima Corporation in Japan and as a consulting engineer in MEL Consultants Pty. Ltd in Australia. During this period, he was involved in numerous wind engineering and structural dynamic studies on major building and structural developments in Asia and Pacific region. His main research interests and technical expertise are in wind engineering,structural dynamics, earthquake engineering, computational mechanics, reliability and risk assessment. Over the last twenty years, his research in these fields has resulted in over 270 refereed international journal papers. He is a co-author of four books on structural dynamics, structural health monitoring, earthquake engineering and structural reliability. Prof. Li is one of the most cited researchers in civil engineering according to Global Ranking of Academic Subjects 2016 by Elsevier. Prof. Li has received several awards for his academic contributions including National Natural Science Foundation of Chinese Outstanding Oversea Scientist Award in 2004 and The First Class Award of the Scientific and Technological Progress from the Ministry of Education of the People's Republic of China in 2010. He was appointed as Cheung Kong Chair Professor by the State Education Ministry of the People's Republic of China and Li Ka Shing Foundation, Hong Kong in 2007. In particular, Prof. Li is the recipient of the 2016 Jack E. Cermak Medal from the American Society of Civil Engineers, the highest honor in wind engineering, in recognition of 'his many contributions to wind engineering that range from fundamental to applied research'. Currently, he is an associate editor of Journal of Structural Engineering, ASCE and an editorial board member for fifteen international journals. Prof. Li has been a principal investigator for 65 research grants with a total funding over HK$40 million since 1998.