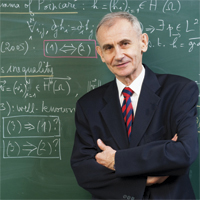 Prior to joining City University of Hong Kong in 2002, Prof. Philippe G. Ciarlet had been with the Université Pierre et Marie Curie in Paris since 1974. His research interests include numerical analysis, finite element methods, partial differential equations, applied differential geometry, mathematical modeling in three-dimensional elasticity, plate and shell theories. He has published more than 190 research papers and he has written sixteen books, some of them very well-received, such as "The Finite Element Method for Elliptic Problems", "Introduction to Numerical Linear Algebra and Optimisation", his three-volume treatise "Mathematical Elasticity", or his textbook "Linear and Nonlinear Functional Analysis with Applications".

In 2005, Prof Ciarlet launched a series of high-profile lectures held at City University, called the "France-Hong Kong Distinguished Lecture Series", under the auspices of the French Academy of Sciences and with the support of the Consulate General of France in Hong Kong. Prof Ciarlet has also initiated the launching of an Agreement between the Collège de France in Paris and City University in 2007.