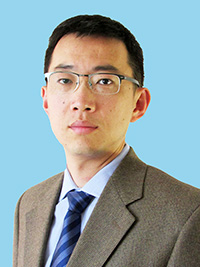 PhD (The University of Iowa)

Dr Liang Zhang received his Bachelor of Medicine (MD equivalent) degree in 2001 with honor from Peking University Health Science Center in Beijing, China. He obtained his PhD degree from the University of Iowa and his PhD research was on delineating the cellular mechanisms that determine the transduction efficiency of adeno-associated virus (AAV) in normal epithelia and cancer cells, under the supervision of Dr John Engelhardt. He performed his postdoctoral training in the laboratory of Dr Jeffrey Wrana on dissecting the signaling mechanisms of cancer metastasis, at the Lunenfeld-Tanenbaum Research Institute in Toronto, Canada.

Our research aims to elucidate the mechanisms by which cancer cells and the tumor microenvironment communicate with each other. The reciprocal interactions between cancer cells and the stromal tissues are recognized as a hallmark of cancer that plays a prime role in tumor initiation, growth, angiogenesis, invasion, metastasis, as well as drug resistance. The current research focus in the laboratory is exosomes, which are small extracellular vesicles that have gained increasing attention for their potent roles in mediating intercellular communication during cancer and other human diseases. We will employ multidisciplinary approaches that incorporate proteomics, genetics, molecular biology, biochemistry, and microscopy to dissect the signaling networks that are implicated in exosome-mediated cancer-stroma crosstalk. Over the next few years, my team will engage in the following areas of research:

Overall these projects aim to elucidate of the molecular and signaling mechanisms that underlie the function of exosomes in cancer-stroma crosstalk. The outcomes will help exploit the full potential of exosomes to discover non-invasive biomarkers of cancer and other human diseases. In addition, we expect our research to open new windows for designing innovative exosome-based bioengineering and clinical applications.