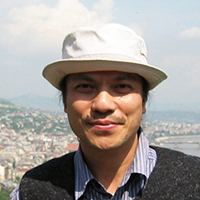 Kenny Kwok Kwan NG obtained his PhD from Harvard University (East Asian Languages and Civilizations), and had studied in the Comparative Literature doctoral program at the University of Washington (Seattle) and the summer program at the School of Criticism and Theory of Cornell University before his study at Harvard. Prior to joining City University, he taught a variety of subjects in Chinese humanities, comparative literature, film culture, photography, and cultural studies at the Hong Kong University of Science and Technology and the Open University of Hong Kong. His book, Li Jieren, Geopoetic Memory, and the Crisis of Writing Chengdu in Revolutionary China (Brill, 2015) seeks to challenge official historiography and rewrite Chinese literary history from the ground up by highlighting the importance of cultural geography and historical memory. His ongoing book projects concern censorship and visual cultural politics in Cold War China and Asia. He looks into the historical transnational relationships between Hong Kong cinema to mainland China, Taiwan, and Southeast Asia so as to map out twentieth-century Chinese cultural history from trans-regional and interdisciplinary perspectives. He has published widely in the fields of comparative literature, Chinese literary and cultural studies, cinema and visual culture in the U.S., UK and Europe, China, Taiwan, and Hong Kong. His research interests are broad and dynamic, which include history and politics in literature and culture, the relationships between literary and visual studies, vernacular literature and urban culture, colonial cultural history, and comparative literature.