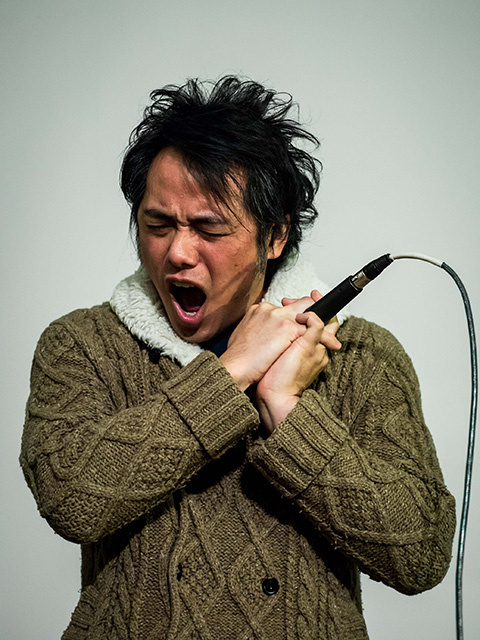 Winner of the 2006-2007 Rome Prize and the 2010-2011 Berlin Prize, Ken Ueno, is a composer, vocalist, improviser, and sound artist.  His music celebrates artistic possibilities which are liberated through a Whitmanesque consideration of the embodied practice of unique musical personalities. Much of Ken’s music is “person-specific” wherein the intricacies of performance practice is brought into focus in the technical achievements of a specific individual fused, inextricably, with that performer’s aura. His artistic mission is to champion sounds that have been overlooked or denied so that audiences reevaluate their musical potential. Ken’s artistic mission is to push the boundaries of perception and challenges traditional paradigms of beauty, and champion the talents of specific performers.

Ken’s music has been performed at Lincoln Center, the Kennedy Center, the Metropolitan Museum of Art, MusikTriennale Köln Festival, Ars Musica, Warsaw Autumn, the GAIDA festival, Darmstädter Ferienkurse, the Muziekgebouw, the Hopkins Center, Spoleto USA, and Steim.  He has been the featured guest composer at the Takefu International Music Festival, Norfolk Music Festival, the Great Lakes Chamber Music Festival, the Pacific Rim Festival, the Intégrales New Music Festival, and the MANCA Festival. Ken’s piece for the Hilliard Ensemble, Shiroi Ishi, was featured in their repertoire for over ten years, with performances at such venues as Queen Elizabeth Hall in England, the Vienna Konzerthaus, and was aired on Italian national radio, RAI 3.  Another work, Pharmakon, was performed dozens of times nationally by Eighth Blackbird during their 2001-2003 seasons. A portrait concert of Ken’s was featured on MaerzMusik in Berlin in 2011. In 2012, he was a featured artist on Other Minds 17. In 2014, Frances-Mairie Uitti and the Boston Modern Orchestra premiered his concerto for two-bow cello and orchestra this past January, and Guerilla Opera premiered a run of his chamber opera, Gallo, to critical acclaim. He has performed as soloist in his vocal concerto with the Boston Modern Orchestra Project in New York and Boston, the Warsaw Philharmonic, the Lithuanian National Symphony, the Thailand Philharmonic Orchestra, and with orchestras in North Carolina, California, and Stonybrook, NY.

Awards, grants, and fellowships that Ken has received include those from the American Academy in Rome, the American Academy in Berlin, Civitella Rainieri, the Townsend Center, the Fromm Music Foundation (2), New Music USA (4), the Pittsburgh Foundation, the Aaron Copland House, the Aaron Copland Fund for Music Recording, Meet the Composer (6), the National Endowment for the Arts, the Belgian-American Education Foundation, and Harvard University. He has twice received support from the Fromm Foundation to support orchestral commissions. He has also received support from the MAP Fund twice – for an evening-long work for Community MusicWorks and himself as vocalist, and for a work for the combined forces of the Prism Saxophone Quartet and the Partch Ensemble. A monograph CD of three of his concertos was released on the Bmop/sound label. In the Spring of 2017, he was a Mellon Visiting Artist at the Susan and Donald Newhouse Center for the Humanities at Wellesley College.

In recent years, Ken has been collaborating with visual artists, architects, and video artists to create unique cross-disciplinary art works. With the artist, Angela Bulloch, he has created several audio installations (driven with custom software), which provide audio input that affect the way her mechanical drawing machine sculptures draw. These works have been exhibited at Art Basel as well as at Angela’s solo exhibition at the Wolfsburg Castle. In collaborating with the architect, Patrick Tighe, Ken created a custom software-driven 8-channel sound installation that provided the sonic environment for Tighe’s robotically carved foam construction. Working with the landscape architect, Jose Parral, he collaborated on videos, interactive video installations, and a multi-room intervention at the art space Rialto, in Rome, Italy. In 2013, Ken created a 24-channel audio installation, Liquid Lucretius, which was installed at the Museo Universitario Arte Contemporáneo in Mexico City for two months. Breath Cloud, a sound installation with 90-speakers was commissioned and installed at the Taipei Fine Arts Museum in May, 2014. 2014 also saw the opening of his collaboration with the architect, Thomas Tsang, at the Inside-Out Museum in Beijing. The software-driven work sonically activates a stairwell as a resonant chamber, which leads to a sonic aperture with an opening outside the building, effectively turning the building into a large wind instrument.

Ken is currently a Professor at the University of California, Berkeley, where he is currently the Jerry and Evelyn Hemmings Chambers Distinguished Professor in Music. He holds a Ph.D. from Harvard University and an M.M.A. from the Yale School of Music, and his bio appears in The Grove Dictionary of American Music. www.kenueno.com