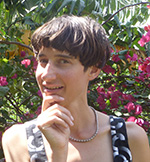 Ingrid Hoelzl is a digital image theorist currently based at the School of Creative Media at the University of Hong Kong. Her articles on the status of the image in the digital environment, in particular its invisible algorithmic operativity (Hoelzl and Marie 2016), have appeared in journals such as Photographies, History of Photography, Leonardo, Visual Studies and Visual Communication.

She is the author of a book on the theory of the photographic self-portrait photographic self-portraiture, Der Autoporträtistische Pakt (Fink, 2008) with a foreword by Elisabeth von Samsonow and (with Remi Marie) of Softimage: Towards a New Theory of the Digital Image (Intellect, 2015) endorsed by Christine Ross and Jeffrey Shaw. The book, which has won enthusiastic reviews in Visual Studies, Journal of Visual Culture, Social Media + Society and Leonardo, investigates digital animation, postproduction, screening, compression, navigation and wireless access as affordances of a new kind of “operative image”, culminating in the thesis of the “softimage” as not only intrinsically merged with software but as a program in itself.

She is currently working on a new book, titled Postimage, exploring the relation of image, data, algorithms and vision in the posthuman episteme. Early drafts have been published in Leonardo 50:1 (February 2017) and in The Posthuman Glossary edited by Rosi Braidotti and Maria Hlavajova (October 2017).

SCREENICITY – The Place If The Image In Digital Culture

Softimage: Towards a new theory of the digital image