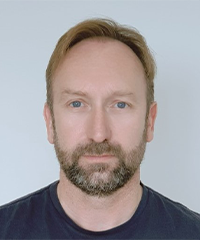 Gareth is Clinical Associate Professor in VCS, a Diplomate of the American College of Veterinary Surgeons (Large Animal) teaching into the equine curriculum of the BVM.

After graduating from The Royal Veterinary College in 1995, Gareth worked in mixed practice before beginning an equine internship at Glasgow University Veterinary School. In 1997 he undertook a residency in Equine Surgery at the University of California Davis School of Veterinary Medicine, and passed the Board examination of the American College of Veterinary Surgeons in 2001.

Dr Fitch has worked as an equine surgeon in private practice in Canada and provided services to the emergency Surgery and Medicine units at Iowa State University. In 2007 he returned to Europe and worked at the University Alfonso X El Sabio in Madrid, Spain as a surgeon and lecturer where he stayed for 5 years. During this time, he completed a Masters in investigative sciences and also worked as team vet to the Spanish 3-day event team. From Spain he worked as a locum in private practice in Germany before taking up a position as a Senior Lecturer in equine surgery at Massey University in New Zealand. During this time, he carried out research on the upper airway in Standardbred racehorses and collaborated on other equine research projects. He was coordinator for equine studies and lectured on equine surgery. He worked as a surgeon in the referral clinic, teaching students, training interns and residents. Gareth was nominated by the final students for two consecutive years for a teaching award.

In 2016 he moved to a private practice in Christchurch, New Zealand and worked as a surgeon and sport horse veterinarian working mostly with thoroughbred and standardbred racehorses. Here he supervised students on extra mural rotations from Massey University. He served on the New Zealand Equine Association in 2014 and is a member of the editing committee for the Equine Veterinary Practitioner.