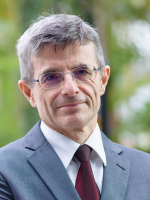 Dirk has co-authored 237 peer-reviewed publications associated with an ISI WoS h-index of 37 (as of November 2016).

Current funding as principal investigator: £1.7 Mill for a BBSRC/DfID funded project entitled 'Controlling and monitoring emerging zoonoses in the poultry farming and trading system in Bangladesh: an interplay between pathogens, people, policy’. In addition, he holds various other smaller grants totalling about about £500k.

He has produced the following teaching videos:

One Health: An introduction by Professor Dirk Pfeiffer