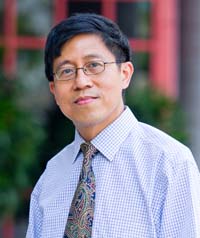 Chong-Wah Ngo received his Ph.D in Computer Science from the Hong Kong University of Science & Technology (HKUST). He received his MSc and BSc, both in Computer Engineering, from Nanyang Technological University of Singapore. His research interests are in multimedia search and computing. He has been serving the technical program committees of numerous multimedia and information retrieval conferences including ACM Multimedia (MM), ACM SIGIR, International Conf. on Image and Video Retrieval (CIVR) and International Conf. on Multimedia and Expo (ICME). In addition, he is an Associate Editor of IEEE Trans. on Multimedia, and is on the editorial board of Journal of Multimedia Data Engineering and Management, and Journal of Advances in Multimedia. He is the program track co-chair of ICME 2011, program co-chair of ACM ICIMCS 2011, ACM MMM 2012 and ACM ICMR 2012. He is founding leader of VIREO (VIdeo REtrieval grOup). He also served as the chairman of ACM (Hong Kong Chapter) during 2008 and 2009.

Before joining CityU, he was a PhD student under the supervision of Prof. T. C. Pong and Prof Roland Chin in HKUST. He joined the research group ofProf Thomas Huang in Beckman Institute as a post-doctoral visitor for a collaborative project between UIUC and HKUST during 2001. He also worked at Information Technology Institute (ITI) of Singapore in 1996, and as summer intern at Microsoft Research Asia in 1999.

He was born in Malaysia (Visit Malaysia and then you will find the smile of people and the smile of nature!). His hometown is at Pekan Nanas (a perfectly peaceful town), Pontian (the southest county in Asia mainland), Johor, Malaysia. He studied in Yu Ming (I) and Foon Yew High School during primary and secondary school time.