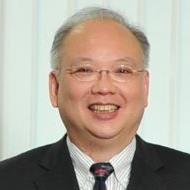 Chi was born in Macao to a family revering knowledge more than anything in life as his late father's formal education was cut short at 5th grade in WWII. The family moved to Hong Kong in 1965 when he was 6 years old and settled in Tai Po where he attended Sacred Heart of Mary Catholic Primary School. During his formative years from 1970 to 1977, he studied at St. Francis Xavier's College while the family lived in Un Chau Street Estate in Cheung Sha Wan. Chi went to the US for his tertiary education in 1978. He first attended City College of New York and then transferred to Ohio State University, Columbus, Ohio. After receiving his bachelor and master degrees in 1981 and 1982, respectively, he went to the University of Illinois at Urbana-Champaign to study under the tutelage of Professor Raj Mittra. He received his PhD in 1987 and stayed at Illinois as a Visiting Assistant Professor in the Electrical and Computer Engineering Department for 2 years. Prior to joining CityU in 1996, he was a tenured Associate Professor in Electrical Engineering Department at the University of Washington.

Awards Received By Undergraduate and Graduate Students Under My Supervision