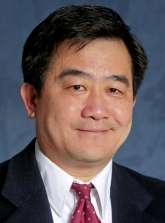 Professor Jen received his bachelor's degree from the National Tsing Hua University in Taiwan and PhD from the University of Pennsylvania in USA. He was the Boeing-Johnson Chair Professor and Chair of the Department of Materials Science & Engineering at the University of Washington, Seattle. He also served as Chief Scientist for the Clean Energy Institute endowed by the Washington State Governor.

Professor Jen is a distinguished researcher with a well-cited publication record. He has co-authored >890 publications, given over 500 invited presentations, has >59,000 citations and an H-index of 125, and is co-inventor for more than 50 patents and invention disclosures. His research interests are inter-disciplinary, specializing in organic/hybrid functional materials and devices for photonics, energy, sensors, and nanomedicine. He was named by Thomson Reuters as one of the “Highly Cited Researchers” in the past several years and as one of the "World's Most Influential Scientific Minds" in 2015 and 2016 in the area of materials science.

Being an internationally recognized scholar, Professor Jen has been elected as Fellow by several professional societies including AAAS, MRS, ACS, PMSE, OSA, SPIE, and as an Academician by the Washington State Academy of Sciences. He has also demonstrated capability on technology transfer and fund raising, and is the founder of the Institute of Advanced Materials for Energy (i-AME) of the University of Washington.

Employing the “molecular engineering” approach to tailor size, shape, sequence, and functionality of organic/hybrid functional materials and explore their applications.

Name by Times Higher Education (THE) as one of the “Top 10 Researchers in the World Working on Perovskite Solar Cells”.